AutoLab 2.6 was recently released with support for vSphere 6.0! The creators of AutoLab have also been working with the folks over at Ravello Systems to provide an AutoLab blueprint to run the lab in a public cloud (Google/AWS) with Ravello technology. As I’m often mobile and booting my lab on my laptop when I arrive at a customer’s office can take a while, I thought it would be really nice to boot the lab in the cloud before I leave the office, and have it ready for me when I arrive. Running it in the cloud also allows me to retain local compute resources for whatever else I’m using, instead of consuming all 16 GB of RAM on my laptop for the lab.

At the request of Anthony (@vCloudernBeer), I’ll be documenting my setup and experience. The deployment process is spoon-fed to the user in the deployment guide, so if you’re going to do this yourself, be sure to just use the official guide. It’s extremely well written, and makes this deployment a snap. So without further ado…

I’ve already got a Ravello account, so getting registered is outside the scope of this walk-through. So the first step for me was to e-mail over to Ravello support and ask for the AutoLab blueprint to be copied over. In Ravello terms, a “blueprint” is a pre-defined set of VMs and networking. Thankfully, we don’t have to build the AutoLab topology from scratch. Once they copied it over (They were very fast getting back to me!) the next step is adding the blueprint to my own list of applications.

Update: Since the time of writing, Ravello has introduced an awesome new feature which will get it’s own full article here soon. It’s called the Ravello Repo – a place to share community generated blueprints. The AutoLab blueprint is now available in the Repo here: https://www.ravellosystems.com/repo/blueprints/59409516

At this point, we see a canvas with the AutoLab layout, including a shell for each VM, and flipping over to the Network tab shows how all the components are connected, as well as how the lab is accessed from the Internet. This was simpler and faster than importing the downloaded VMs to Workstation or Fusion as I’ve done in past versions. 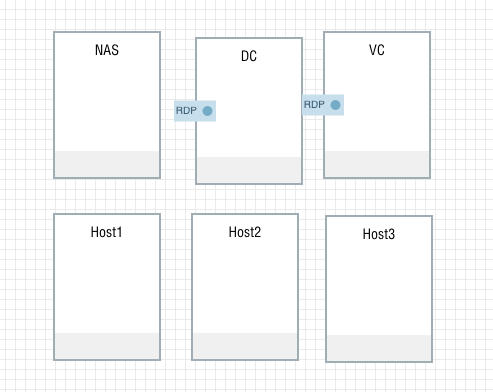 Once the blueprint is ready, the next step is providing media. Because AutoLab is free, but the software it runs is not, you must provide your own install media. The AutoLab folks can’t distribute the proprietary software. So in this case, I need to upload the ESXi ISO, the vCenter ISO, and a Server 2008 R2 ISO. Local versions of AutoLab are using Server 2012 now, which I would prefer, but it sounds like due to some complications in the interoperability with AutoLab and Ravello, 2012 has a few kinks that need to be worked out. That’s coming, but for now we’re going to need to stick with 2008. The time I saved by not having to import the VMs was quickly sucked up by the hours I had to wait for my slow link to upload >5 GB of ISOs. This part stinks, but there’s not really a way around it, and you should only have to do it once. I went ahead and started the upload when I finished working for the day and let it complete overnight.

Once this completes, I’ll keep going in Part 2. The next part will involve orchestrating the building of the VMs. It looks like this is basically the same process as building AutoLab locally – populate the build share, then power on the DC, then VC, running the validation scripts at each step along the way.

I’m really looking forward to being able to use this, and would like to take one more opportunity to thank the folks at both AutoLab and Ravello Systems for their contributions to the community at large. Both of these tools are immensely helpful to me!