In the second of this three-part series, I’ll walk through the initial configuration of the Flash Cluster and prepare for part three which will be the actual test. I didn’t plan to test performance since my lab isn’t exactly built from production gear and I didn’t figure it’d be a fair test. Out of curiosity, I tested anyway, and lets just say that the results are worth sharing after all. But that’s for later. For now, let’s get set up!

In the screenshot below, you can see that I’ve allocated a 30 GB SATA SSD to each host. This is what FVP will use for the Flash Cluster we’ll create in a moment. Just wanted to show what we’re working with. For the record, in my lab this is a consumer-grade SSD.

A Flash Cluster is the aggregation of local flash devices pooled to accelerate block storage. In the screenshots below, I’ll walk through set up. This was super simple, and in a real world scenario you could walk through this your first time in half an hour. I’m sure professionals do this in about 5 minutes. I love how much focus is going on from vendors lately on simplicity! People don’t want to pay for 8 hours of professional services to get their product up and running! (/rant) Alright, step 1: open the Flash Clusters screen from the vCenter section of the vSphere Client.

On your first time opening this, you’ll be prompted to create a security exception because of the self-signed certificate. You could avoid this by installing a legitimate cert, but it was my lab, so we march on! 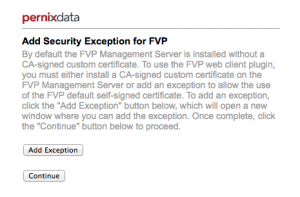 I clicked on “Create Flash Cluster” and was given this little dialogue. I gave it this little bit of information and hit OK. Well that was easy! 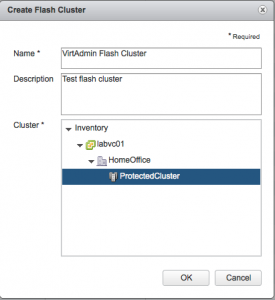 Next step is to start configuring the Flash Cluster. We’ll need to tell it two things: which flash devices do we want it to use for acceleration, and which datastores do we want it to accelerate using those devices? For the first part, we add devices: 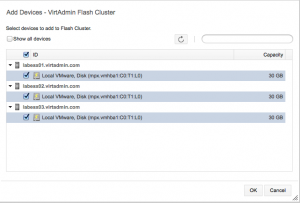 Next, we flip to the tab immediately to the right and add the datastores. You’re not going to believe what comes next…. 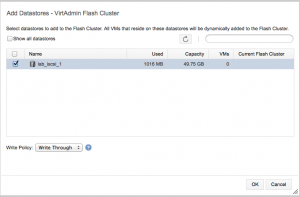 Nothing. Nothing comes next. FVP is now accelerating the block storage that we’ve added, and we’re on our way out to lunch. Shown below is the whopping one VM that I had living on that datastore 🙂 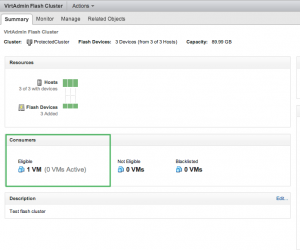 Coming in part three of this series is the fun – we’re going to run some tests using VMware’s IO Analyzer appliance and show what FVP really does. As I mentioned earlier, this is just a lab so production results will probably not be apples to apples, however I think the results are really exciting and worth sharing. Stay tuned!