Storage has come a long way in the last decade, and we shouldn’t take those massive advances for granted. But with the way data centers work today, the conventional array model has some limitations – both from the business side as well as the technical side. Conventional SAN models don’t scale well, and in a time when “web-scale” is a buzzword, this is a problem. What if, rather than trying to predict your storage needs over the next 5 years when making a purchase, you bought only what you need? This is the essence of web-scale: buy only what you need, and add more as soon as you need it without a hassle.

There are even more, but since we’ve established that something needs to change, what can we do? Enter Coho Data (@cohodata). 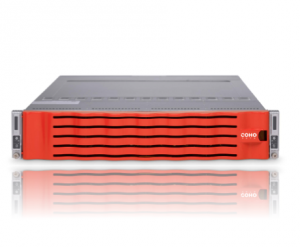 Enabled by software defined networking (OpenFlow), Coho Data has managed to offer a linear scale-out storage solution with virtually no upper limit on IOPS and capacity. The DataStream 1000 is a combination of a few things: SDN switch (Arista 7050T) and a pile of commodity hardware including 3 TB spinning disks for capacity and Intel MLC PCIe flash for performance. This. baby. screams. But fast isn’t everything. Andy Warfield (CTO at Coho) said, “If you buy storage now for the next 5 years, you’re going to be very sad in about two years.” Statistics show that an average business’s need for storage capacity is nearly doubling every two years. At this rate, it’s important to be able to grow quickly. With the DataStream 1000, just add another 2U box (including two MicroArrays) and plug it in; the rest will be taken care of in software.

As a CIO, not only is one concerned with the technical features of a product, but also with the company that stands behind them. Rest assured; the Coho team is BRILLIANT. While at #VFD3, we spoke with Andy Warfield (@andywarfield) and Forbes Guthrie (@forbesguthrie). If you’re interested in the leadership of the company, do a bit of digging on the backgrounds of these two and I think you’ll be satisfied.

I believe that the DataStream 1000 is a fantastic solution for any business that isn’t sold on hyper-convergence but needs a very agile, high-performance storage array. This is one of the most exciting I’ve seen in recent days. They regularly put on webinars and events that you can attend for free and get more information for yourself. Below are some links to more information about the company, as well as to the videos of the Tech Field Day interviews where I got to hear from Andy and Forbes. I hope you’ll do yourself a favor and take a look!

DISCLOSURE: Travel and expenses for Tech Field Day – Virtualization Field Day 3 were provided by the Tech Field Day organization. No compensation was received for attending the event. All content provided in my posts is of my own opinion based on independent research and information gathered during the sessions.