A Vagrantfile is named for the way it appears on the filesystem. It’s literally a file called ‘Vagrantfile’ with no extension. The syntax used within the file is actually Ruby, but don’t let that scare you. I don’t know Ruby from my foot, and I’m getting by just fine. The purpose of a Vagrantfile is to define the machine(s) and provide details about how to configure them. This Vagrantfile is the portion of the project that should be maintained within a version control system (I use Github) to ensure that all systems are configured the same way and that collaborative efforts don’t step on each other’s toes.

There are four major namespaces within a Vagrantfile where configuration can be done. They are:

Also, rather than the one Vagrantfile in the project directory, the reality is that a series of Vagrantfiles may be loaded. This allows the most specific settings (at the Provider level, for instance) to overwrite generic settings on the Box. The load order (taken from the Vagrant documentation) is show here:

One other note from the documentation: because the Vagrantfile is actually just Ruby, you can easily use programming constructs like loops. This would allow the configuration of 5 machines in a multi-machine project in a cleaner, more elegant way. The below is an example from the docs.

This will make all three of the machines echo “hello from node ‘n'” in a local shell. Obviously not interesting, but if it was an actual configuration task, this would be quite helpful as opposed to doing this on all three machines.

Writing a Vagrantfile and base box from scratch may certainly be necessary if the purpose of the deployment is to use as a development environment for a custom enterprise application. The environment would need to be provisioned exactly the way the development team needs, and would likely have plenty of unique customizations to suit their environment. However, writing a Vagrantfile can be a non-trivial task. A shortcut would be nice… Enter boxes!

A Vagrant box is a package of all the information required to go from zero to fully provisioned, and they’re shared publicly and freely in places like the Atlas box catalog and vagrantbox.es. In the first post, the Ubuntu box came from the Atlas catalog! When I ran vagrant init hashicorp/precise32, it grabbed the box from here! Adding some other kind of box is so easy! If I needed a CentOS box to do some testing with, all that needs to be done is run vagrant box add chef/centos-6.5.In no time, I’ll have a local copy that I can initialize at any time. Or, if I need it right away, this can all be done in one stroke but just using the init command like I did with the Ubuntu machine: vagrant init chef/centos-6.5.

Because boxes support versioning, a development team can iterate as their development environment changes and matures. Most boxes in the wild use semantic versioning. This also comes in handy when boxes need patched or need new dependencies added. 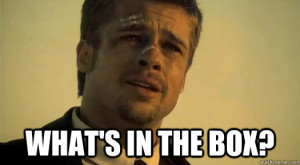 You may be wondering: just what exactly is in the box? Well, boxes are unique to providers (VirtualBox, Fusion, AWS, etc.) so first of all the box contains information specific to the provider. Secondly, it contains metadata about the box.

That’s it for this section! In Part 4, I’ll be taking a look at networking configuration. Vagrant machines have the option to either use a private “host only” network, or use port forwarding, or gain access directly to the public (could still mean internal LAN) network.